ABOVE THE LAW
Just who protects those who refuse to enforce the law?
and WHY? 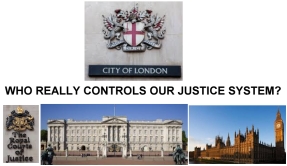